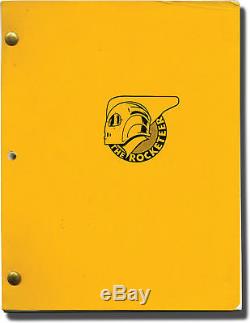 Description: Revised First Draft script for the 1991 film. Based on 1982 graphic novel by Dave Stevens, one of the first American film adaptations of its kind, and a film that marked an interesting and prescient departure for Disney from their standard fare. In 1930s Hollywood, stunt pilot Cliff Secord (Billy Campbell) comes into possession of a jet-pack after getting caught in the crossfire between FBI agents and a group of gangsters.

The item "Joe Johnston ROCKETEER Original screenplay for the 1991 film 1988 #144510" is in sale since Wednesday, January 9, 2019. This item is in the category "Entertainment Memorabilia\Movie Memorabilia\Scripts\Originals\Unsigned". The seller is "vanburenantiques" and is located in Baltimore, Maryland.