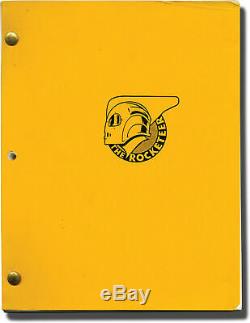 Based on 1982 graphic novel by Dave Stevens, an early entry into the superhero movie canon, following the success of 1989's "Batman, " and a cult classic in its own right. In 1930s Hollywood, stunt pilot Cliff Secord (Billy Campbell) comes into possession of a jet-pack after getting caught in the crossfire between FBI agents and a group of gangsters. Secord is dubbed the "Rocketeer" by the media after being sighted flying sky-high, becoming the target of both FBI and Nazi secret agents who are after the jet-pack. Title page present, dated November 11, 1988, noted as REVISED FIRST DRAFT, with credits for screenwriters Danny Bilson, Paul De Meo, William Dear, and graphic novelist Dave Stevens. 125 leaves, with last page of text numbered 124.

Since 1996, we have specialized in rare books and paper relating to twentieth century literature, genre fiction, the arts, and popular culture, with a particular emphasis on cinema. All books noted as First Editions are also First Printings unless indicated otherwise. This listing was created by Bibliopolis. The item "Joe Johnston ROCKETEER Original screenplay for the 1991 film 1988 #144510" is in sale since Monday, May 6, 2019. This item is in the category "Entertainment Memorabilia\Movie Memorabilia\Scripts\Originals\Unsigned".