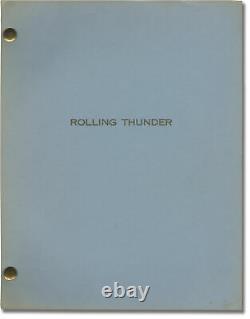 One of the best unheralded revenge thrillers of the 1970s, with William Devane taking an unusual turn as a sympathetic character, though forced to be quite cold-blooded. Playing a Vietnam veteran with absolutely nothing left to lose, Devane beats a warpath from Texas to Mexico in pursuit of a gang of murderous thugs who killed his family in order to steal a box of silver coins. Paul Schrader's fourth produced screenplay, but written several years before the film's release, around the same time he penned Taxi Driver. Blue titled wrappers with the film title in gilt. Title page present, dated June 14, 1976, with credit for screenwriter Schrader.