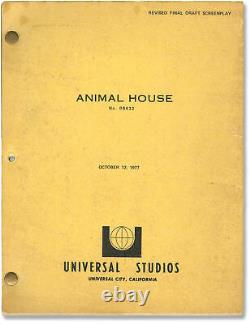 National Lampoon was a huge success as an alternative magazine in the early 1970s, and irrevocably altered its future in 1978 with the production of this film, an irreverent, sharp, and now classic comedy. And importantly, this was the film that catapulted Harold Ramis and John Belushi from television into the movies, where they would both flourish. Nominated by the Writer's Guild of America for Best Comedy Screenplay in 1979.

Xerographic duplication on eye-rest green stock, rectos only. Pages Very Good plus, wrapper Very Good plus, with light foxing to the page edges and wrappers, bound with two gold brads. Subject: 1970s Cinema, Comedy, Film Scripts, National Film Registry. Royal Books is located in the midtown area of Baltimore, Maryland. Since 1996, we have specialized in rare books and paper relating to twentieth century literature, genre fiction, the arts, and popular culture, with a particular emphasis on cinema. All books noted as First Editions are also First Printings unless indicated otherwise. This listing was created by Bibliopolis.