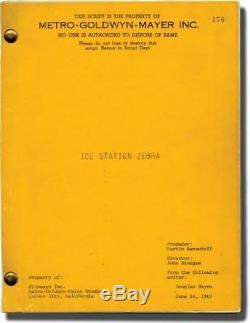 Based on Alistair MacLean's 1963 novel of the same name. Commander James Ferraday (Hudson) receives orders to rescue the crew of Ice Station Zebra, a weather station located at the North Pole.

David Jones (McGoohan), a British civilian, Captain Anders (Brown), a Marine with a platoon of troops, and Boris Vasilov (Borgnine) accompany Ferraday on the nuclear submarine USS Tigerfish. But once arrived at the station, not all is as it seems, and someone will do anything to interfere with the mission. Nominated for two Academy Awards, Best Cinematography and Best Effects. Set the Arctic Circle, shot on location in California.

This listing was created by Bibliopolis. The item "John Sturges ICE STATION ZEBRA Original screenplay for the 1968 film #135860" is in sale since Tuesday, January 8, 2019. This item is in the category "Entertainment Memorabilia\Movie Memorabilia\Scripts\Originals\Unsigned". The seller is "vanburenantiques" and is located in Baltimore, Maryland. This item can be shipped worldwide.