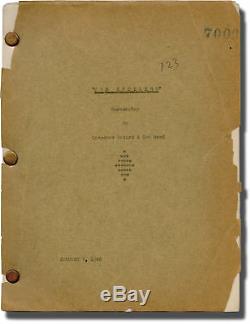 The two are financed by saloon entertainer Cherry Malotte (Dietrich), and fight to save their gold claim from crooked commissioner Alexander McNamara (Scott). Service makes a cameo and recites some of his poetry.

Arguably the most successful, most known of the five screen versions of Beach's Klondike western. Nominated for an Academy Award (Best Art Direction).

Full pagination available upon request. Hardy, The Overlook Film Encyclopedia: The Western US. Subject: Film Scripts, Films with Literary Sources, Western. Royal Books is located in the midtown area of Baltimore, Maryland. Since 1996, we have specialized in rare books and paper relating to twentieth century literature, genre fiction, the arts, and popular culture, with a particular emphasis on cinema.

All books noted as First Editions are also First Printings unless indicated otherwise. This listing was created by Bibliopolis. The item "John Wayne SPOILERS Original screenplay for the 1942 film Marion #123771" is in sale since Thursday, February 7, 2019. This item is in the category "Entertainment Memorabilia\Movie Memorabilia\Scripts\Originals\Unsigned".