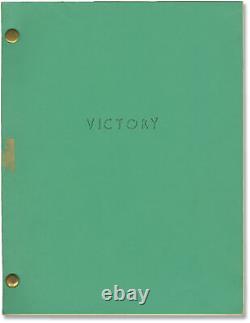 Written by author, poet, journalist, and speechwriter Jeremy Larner, who won the 1972 Academy Award for Best Screenplay for Michael Ritchie's "The Candidate" starring Robert Redford and Peter Boyle. Larner also co-wrote with Jack Nicholson the 1971 Nicholson film "Drive She Said, " starring William Tepper, Karen Black, and Bruce Dern, Nicholson's directorial debut. Based on the 1915 novel by Joseph Conrad. Conrad's novel has been adapted many times for film. The earliest, a silent film in 1919, directed by Maurice Tourneur starring Jack Holt, Seena Owen, and Lon Chaney, Sr. In 1930 as "Dangerous Paradise, " directed by William Wellman and starring Richard Arlen and Nancy Carroll. In 1940, directed by John Cromwell and starring Fredric March and Betty Field. In 1987, in Germany, as "Des Teufels Paradies" ("The Devil's Paradise") directed by Vadim Glowna and starring Jurgen Prochnow, Sam Waterston, and Suzanna Hamilton, and most recently in 1995, directed by Mark Peploe and starring Willem Dafoe, Sam Neill, and Irene Jacob. Harold Pinter also reportedly wrote an unproduced screenplay adaptation in 2015.

Axel Heyst tries lives an isolated life on the islands of the Malay Archipelago but falls in love with and rescues Alma, a member of an all woman orchestra who is being abused by the hotel's owner where they perform. A copy of the script is identified at Boston University at the Howard Gotlieb Archival Research Center in The Inventory of the Jeremy Larner Collection #613. Title page present, dated February 1977, noted as SECOND DRAFT, with credits for screenwriter Jeremy Larner and author Joseph Conrad. 152 leaves, with last page of text numbered 150.

All books noted as First Editions are also First Printings unless indicated otherwise. This listing was created by Bibliopolis. This item is in the category "Entertainment Memorabilia\Movie Memorabilia\Scripts\Originals\Unsigned". The seller is "royalbks" and is located in this country: US.