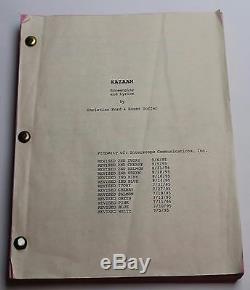 This is an Original movie script from the 1996 movie titled, Kazaam. This complete script has multi-colored revision pages throughout it and is 114 pages long. Please view the pictures above carefully. It is in very good condition. Being a lone young boy in the'hood is dangerous and unpleasant. This is what Max experiences when he fools a gang of local toughs who cornered him at school. The gang finds out that the key he gave them is of no value in committing a robbery, and they chase him through the streets of his neighborhood, bent on revenge. He tries to escape by slipping into the open door of an old warehouse, but they follow him there, too. While running from them through aisles filled with all kinds of stuff, he bumps into an old boom box. By doing that, he manages to release Kazaam, a genie who has been held captive for thousands of years.

In order to stay free, Kazaam must give Max three wishes. POSTER IS NOT INCLUDED, IT IS JUST BEING USED AS A VISUAL REFERENCE. Specializes in rare and collectible movie scripts.

I know that there are a lot of items to search through, but there is definitely something for you. Once you check off this little box it will allow you to search for a specific word that is contained in any of our listings' actual description. Here all of the original movie scripts will be categorized by decade, which will help you to narrow down what you are looking for by the year it was made. The item "KAZAAM 1995 Original Movie Script SHAQ is a GENIE, must grant three wishes" is in sale since Wednesday, March 27, 2019.