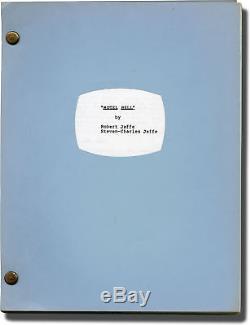 The victims are kept alive and fattened up for the meal they are to become: Farmer Vincent's Fritters. A low-budget but often witty parody of more serious horror films, like Hitchcock's "Psycho" (1960) and Tobe Hooper's "The Texas Chain Saw Massacre" (1974). Shot on location in California at the Sable Ranch. Blue untitled wrappers, with a die-cut title window. Title page present, dated 3/1/80, with credits for screenwriters-producers Jaffe and director Connor.

The item "Kevin Connor MOTEL HELL Original screenplay for the 1980 film #138375" is in sale since Saturday, March 23, 2019. This item is in the category "Entertainment Memorabilia\Movie Memorabilia\Scripts\Originals\Unsigned". The seller is "vanburenantiques" and is located in Baltimore, Maryland.