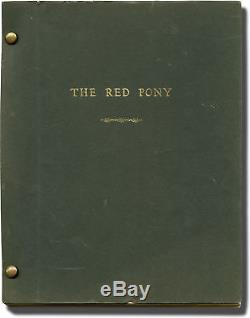 A young boy is enamored with the colt he has been entrusted to raise, only to find the colt has caught an illness and is dying. Steinbeck's first film assignment, though other Steinbeck screenplays would end up being released prior to The Red Pony. At the time it was the longest and costliest production in Republic history, borrowing Robert Mitchum from RKO and also starring Myrna Loy. Set in California and shot there on location. Pink titled wrappers, noted as REVISED SHOOTING SCRIPT on the front wrapper, rubber-stamped copy No.

143 leaves, with last page of text numbered 141. Pages Near Fine, wrapper Very Good plus, bound with two gold brads. Subject: 1940s Cinema, Film Scripts, Films with Literary Sources, Western, Writers. Royal Books is located in the midtown area of Baltimore, Maryland. Since 1996, we have specialized in rare books and paper relating to twentieth century literature, genre fiction, the arts, and popular culture, with a particular emphasis on cinema. All books noted as First Editions are also First Printings unless indicated otherwise. This listing was created by Bibliopolis. The item "Lewis Milestone RED PONY Original screenplay for the 1949 film 1947 #143525" is in sale since Tuesday, April 9, 2019. This item is in the category "Entertainment Memorabilia\Movie Memorabilia\Scripts\Originals\Unsigned". The seller is "vanburenantiques" and is located in Baltimore, Maryland. This item can be shipped worldwide.