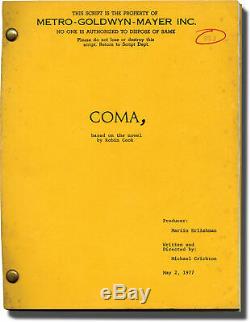 Coma (Original screenplay for the 1978 film). Author: Crichton, Michael (director, screenwriter); Robin Cook (novel); Martin Erlichman (producer); Michael Douglas, Rip Torn, Genevieve Bujold (starring) Title: Coma (Original screenplay for the 1978 film) Publication: Beverly Hills, CA: Metro-Goldwyn-Mayer [MGM], 1977. Description: Draft script for the 1978 film. Based on the novel of the same name by Robin Cook. This early Crichton film plays on a powerful combination of a fear of hospitals and of certain real elements of the medical industry, depicting a decidedly feminist protagonist who discovers a black market organ harvesting plot and must overcome the doubt and condescension of her male superiors to halt the illegal operation.

Crichton and novelist Cook both have backgrounds in medicine, and Crichton said the project appealed to him as a way to put people's fears into a safe perspective, to be enjoyed remotely as scares. One of Michael Douglas' first major roles.

Set in Boston, and filmed on location in various locations in Massachusetts and Los Angeles. Goldenrod titled wrappers, rubber-stamped copy No. 259, dated May 2, 1977, with credits for novelist Cook, screenwriter director Crichton, and producer Erlichman.

The item "Michael Crichton COMA Original screenplay for the 1978 film 1977 #143536" is in sale since Saturday, October 12, 2019. This item is in the category "Entertainment Memorabilia\Movie Memorabilia\Scripts\Originals\Unsigned". The seller is "vanburenantiques" and is located in Baltimore, Maryland.