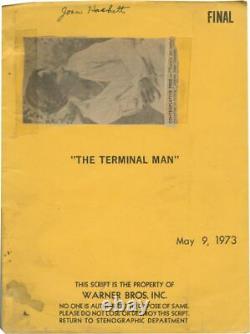 Actress Joan Hackett's working copy, with her ownership name in holograph ink (and an affixed newspaper clipping) on the front wrapper, and her brief annotations on the title page. Based on the 1972 novel by Michael Crichton. Noted director Mike Hodges' third film, and first to be made in the US (after "Get Carter" in 1971 and "Pulp" in 1972). An unusual and prescient sci-fi thriller that was poorly distributed in the US, but over time counted Stanley Kubrick and Terrence Malick among its admirers. Segal, in a serious against-type role, is a scientist who agrees to an experimental treatment wherein a tiny computer is implanted in his head to help control violent tendencies.

The computer malfunctions (probably Windows-based) and he becomes a psychotic killer. When Mike Kaplan, a Warner Bros international marketing executive, attempted to override Warner Bros' decision not to release the film in Britain, he sought Kubrick's help. After explaining the situation, and how the film required a different marketing campaign, Kubrick interrupted with, I've already seen it and it's terrific. " The director Terrence Malick wrote to Hodges expressing how much he loved watching The Terminal Man, saying "I have just come from seeing The Terminal Man and want you to know what a magnificent, overwhelming picture it is. You achieve moods that I've never experienced in the movies before, though it's only in hope of finding them that I keep going.

Your images make me understand what an image is, not a pretty picture but something that should pierce one through like an arrow and speak in a language all its own. Yellow titled wrappers, noted as FINAL on the front wrapper, dated May 9, 1973. Distribution page present, with receipt intact.