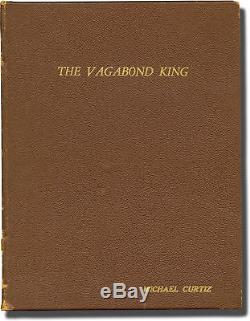 Director Michael Curtiz's presentation copy, in tan leather with gilt titles and Curtiz's name at the bottom right corner of the front board. An adaptation of the 1925 operetta of the same name by Rudolf Friml which is based on Justin Huntly McCarthy's 1901 romantic novel and play If I Were King. Set in France, in the year 1461. Brown leather covered boards, titles in gilt. Title page present, dated December 9, 1954, with credits for producer Pat Duggan, director Michael Curtiz, screenwriter Ken Englund.

114 leaves, with last page of text numbered 96A. Mimeograph, with blue and goldenrod revision pages throughout, dated variously between 12-15-54 and 2-9-55. Pages Near Fine, binding Very Good plus with some wear at the edges. Subject: 1950s Cinema, Film Scripts, Films Based on Plays, Musical. Royal Books is located in the midtown area of Baltimore, Maryland.

The item "Michael Curtiz VAGABOND KING Original screenplay for the 1956 film 1954 #142898" is in sale since Thursday, February 7, 2019. This item is in the category "Entertainment Memorabilia\Movie Memorabilia\Scripts\Originals\Unsigned". The seller is "vanburenantiques" and is located in Baltimore, Maryland. This item can be shipped worldwide.