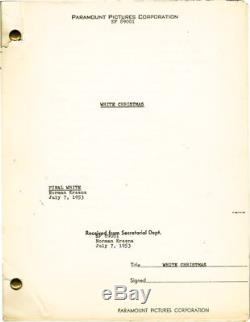 Filmed as something between a remake of and a follow-up to 1942's "Holiday Inn" (also made by Paramount), the action takes place mostly in Vermont at an old inn. Corny and heartwarming in the extreme, with a parade of musical numbers penned by Irving Berlin, whose song, "Count Your Many Blessings, " made its debut here and was nominated for an Academy Award. White self titled wrappers, noted as FINAL WHITE on the front wrapper, rubber-stamped copy No.

Royal Books is located in the midtown area of Baltimore, Maryland. Since 1996, we have specialized in rare books and paper relating to twentieth century literature, genre fiction, the arts, and popular culture, with a particular emphasis on cinema. All books noted as First Editions are also First Printings unless indicated otherwise. This listing was created by Bibliopolis. The item "Michael Curtiz WHITE CHRISTMAS Original screenplay for the 1954 film #133288" is in sale since Saturday, December 8, 2018.