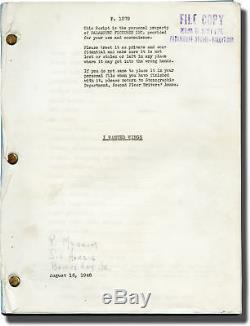 The film encountered some resistance by the censor board for Lake's character, namely concerning a ploy in which she pretends to be pregnant to try to win Milland. Screenwriter Richard Maibaum, who would go on to write 12 James Bond films, was proud of his work on "I Wanted Wings" due to the way it brought Army aviation into the public eye on the eve of US involvement in World War II. Winner of an Academy Award for its special effects, which included unprecedented cooperation from the US Army, to the tune of 1,160 aircraft, 1,050 cadets, 450 officers and instructors, 2,543 enlisted men, and the first public footage of the inside of the B-17 Flying Fortress while in flight.

Set in Texas and California, and shot there on location. White titled self wrappers, noted as production No.

Since 1996, we have specialized in rare books and paper relating to twentieth century literature, genre fiction, the arts, and popular culture, with a particular emphasis on cinema. All books noted as First Editions are also First Printings unless indicated otherwise. This listing was created by Bibliopolis. The item "Mitchell Leisen I WANTED WINGS Original screenplay for the 1941 film #140156" is in sale since Saturday, March 23, 2019. This item is in the category "Entertainment Memorabilia\Movie Memorabilia\Scripts\Originals\Unsigned". The seller is "vanburenantiques" and is located in Baltimore, Maryland.