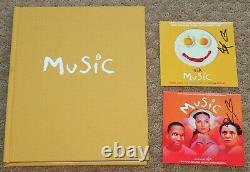 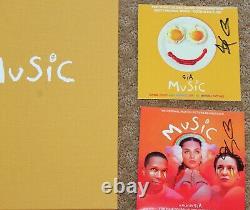 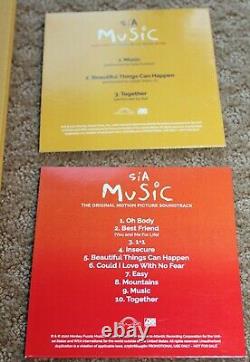 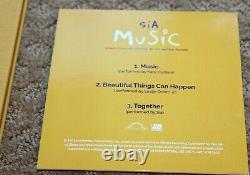 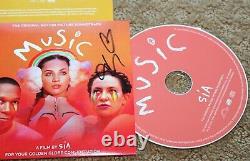 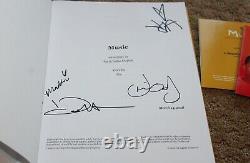 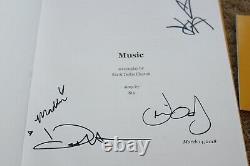 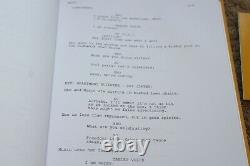 This is a brand new (not sealed) promotional signed FYC screenplay for the film MUSIC PLUS 2 CD SOUNDTRACKS HAND SIGNED BY SIA, written and directed by award-winning musical artist SIA. The film explores two of Sia's favorite themes: finding your voice and creating family. The screenplay is written by Dallas Clayton and Sia, from a story by Sia. The film stars Kate Hudson, Mary Kay Place, Ben Schwartz, Maddie Ziegler Juliette Lewis, and more.

The hardcover script has a bright yellow cover with the film's title on the front, and contains 110 pages. It measures approximately 9" x 11". It is hand signed on the title page by Sia, Dallas Clayton, Juliette Lewis and Maddie Ziegler. It was sent to members of the Hollywood Foreign Press to promote the film, which is nominated for a Golden Globe in the Best Film. The first cd has 3 tracks and the second CD has 10 tracks.

Please see photo for more details on the tracks. The item "MUSIC A FILM BY SIA HAND SIGNED PROMO SCREENPLAY FYC + CD SOUNDTRACK" is in sale since Wednesday, February 24, 2021. This item is in the category "Entertainment Memorabilia\Movie Memorabilia\Scripts\Originals\Signed".

The seller is "movieheaven1968" and is located in Canoga Park, California. This item can be shipped worldwide.