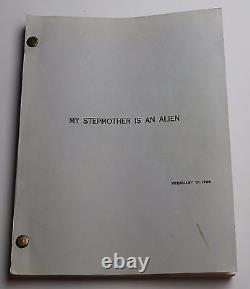 Please view all of the pictures above carefully. This script is in very good overall condition. An alien is sent on a secret mission to Earth, where she appears as a gorgeous, attractive, and single lady. Her mission is to make contact with a rather nerdy young scientist, who's quite overwhelmed by her attentions, and isn't aware of the connection between her arrival and his work.