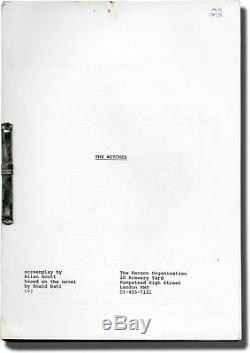 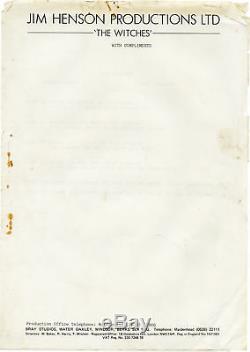 "With Compliments" page on Jim Henson Productions letterhead and a page of script notes dated 10-2-88 laid in. Based on the 1983 novel by Roald Dahl. Anjelica Huston stars as a legitimately frightening witch intent on turning all children in England into mice, only to be foiled by a boy and his grandmother. The final Jim Henson Productions effort complete prior to Henson's death, and the final film based on a Roald Dahl story produced prior to Dahl's passing the same year. Overlooked upon its release, it has since gained a cult following.

Set in England, shot on location in England and Norway. White titled wrappers, copy No.

Subject: 1990s Cinema, Adventure, Animation, Comedy, Film Scripts, Films with Literary Sources, Women's Interest. Royal Books is located in the midtown area of Baltimore, Maryland. Since 1996, we have specialized in rare books and paper relating to twentieth century literature, genre fiction, the arts, and popular culture, with a particular emphasis on cinema.

All books noted as First Editions are also First Printings unless indicated otherwise. This listing was created by Bibliopolis. The item "Nicholas Roeg THE WITCHES Original screenplay for the 1990 film 1988 #142808" is in sale since Thursday, January 17, 2019. This item is in the category "Entertainment Memorabilia\Movie Memorabilia\Scripts\Originals\Unsigned". The seller is "vanburenantiques" and is located in Baltimore, Maryland. This item can be shipped worldwide.