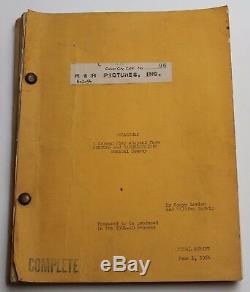 Script Dated: June 1, 1954. This is an Original Movie Script from the 1955 Classic, Oklahoma! This script has the original Rodgers & Hammerstein Production Cover.

On the front cover it is stamped, COMPLETE. This script is Complete and is 115 pages long.

There are some extra Revision pages paper clipped in the back of the script. Please view the pictures above carefully. The script is in very good overall condition with signs of age.

In the Oklahoma territory at the turn of the twentieth century, two young cowboys vie with a violent ranch hand and a traveling peddler for the hearts of the women they love. THE POSTER SHOWN IN THE LAST PICTURE ABOVE IS NOT INCLUDED, IT IS JUST BEING USED AS A VISUAL REFERENCE. Specializes in rare and collectible movie scripts. Our scripts are genuine, authentic and screen used.