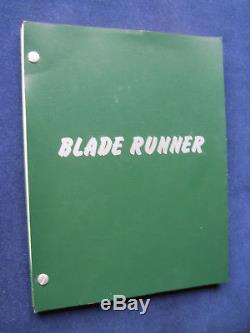 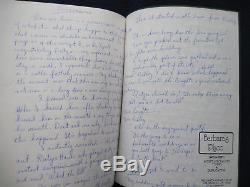 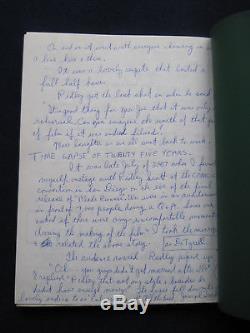 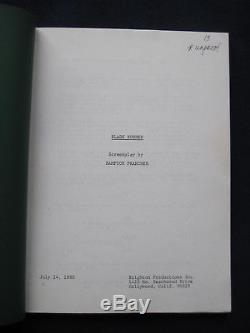 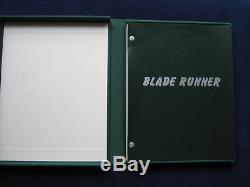 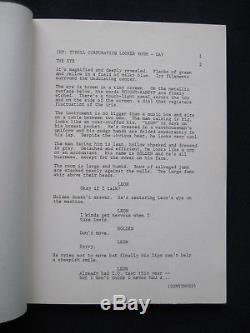 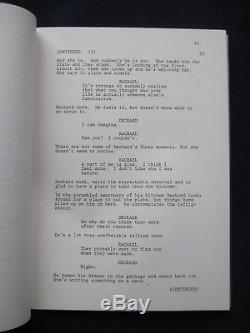 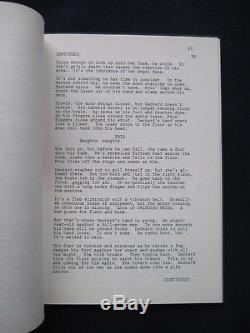 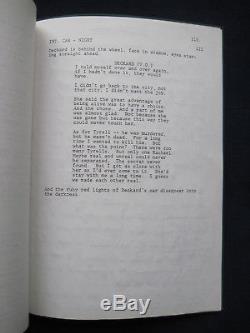 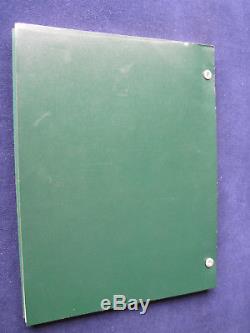 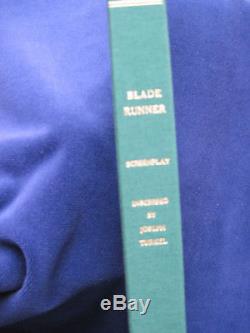 [BLADE RUNNER - THE FILM]. Based on the Novel by Philip K. Dick, Do Androids Dream of Electric Sheep?

Handwritten in ink on the last three blank pages of the script is Turkels essay in full: Embarrassed. There are times in a persons career, regardless of what it is, that things happen to that person that causes an absolute embarrassment.

On page 89 of this script I, as Dr. I approach him & sit next to him in a rather fatherly manner. My thinking at the moment was that this was my son who I had not seen in a long time & I was always very close to.

I leaned over to kiss my prodigal son. When I kissed his, after stroking his hair, I kissed him on the mouth & my tongue went into his mouth. Dont ask me how this happened. Its beyond me to even this day. I instantly recoiled - Holy shit I blurted out.

Rutger Hauer who played Batty recoiled in instant surprise with a quizzical look on his face and said, What the hell. As you can imagine the whole set came apart. Everybody started to roar with laughter. Then it started with lines from Ridley Scott. Oh - how long has this been going on? Have you picked out the furniture yet? I hope the place you picked out is in a fashionable part of the city. I said Ridley I dont know what the hell happened. By now I was into the laughter & good natured joshing Rutger chimed in, The only thing wrong is that youre a bit too old.

When is the engagement party? Is this going to be a fashionable wedding or are you both going to Las Vegas to tie the knot? Don't forget I want to be invited. My wedding gift is going to be cash. On and on it went with everyone chiming in with a line here & there.

It was a lovely respite that lasted a full half hour. Ridley got the last shot in when he said, Its a good thing for you Joe that it was only a rehearsal. Can you imagine the worth of that piece of film if it was indeed filmed?

More laughter as we all went back to work. TIME LAPSE OF TWENTY FIVE YEARS.

It was late July of 2007 when I found myself on stage with Ridley Scott at the COMIC-CON convention in San Diego on the eve of the final release of Blade Runner. We were in an auditorium in front of 7,000 people doing a Q&A. Some one asked if there were any uncomfortable moments during the making of the film?

I took the microphone & related the above story. Ridley piped up, Oh - you guys didnt get married after all?

The house fell down to a lovely ending to an Embarrassment. All the best, Joseph Turkel as Dr. The screenplay for Blade Runner was written by Hampton Francher, based on the novel Do Androids Dream of Electric Sheep? Dick, and was directed by Ridley Scott, starring Harrison Ford, Rutger Hauer, Sean Young, Joseph Turkel, Daryl Hannah, Joanna Cassidy, Edward James Olmos, M.

Emmet Walsh, and William Sanderson. Bradbound in stiff dark green wrappers with Blade Runner in silver on the front cover.

Fine condition, enclosed in a custom dark green cloth clamshell box with Blade Runner Screenplay Inscribed by Joseph Turkel gilt-stamped at the spine. This futuristic film tells the story of a group of renegade advanced design androids called replicants who, having discovered that their existences have built-in lifes, seek out their creator, Dr.

Tyrell, in an attempt to become reprogrammed for longer life. All the while, they are being tracked down for destruction by a bounty hunter known as a Blade Runner (Ford) before they can do any serious damage.

This early draft screenplay has some significant differences from the final draft, including having five replicants at large instead of four, Joanna Cassidys character, Zhora, being named Salome, and Edward James Olmoss character, Gaff, is not present. The film has gone through a number of revisions and three feature film releases, culminating in a Directors Cut in 1992 and a 25th anniversary release of a Final Cut remastered version in 2007.