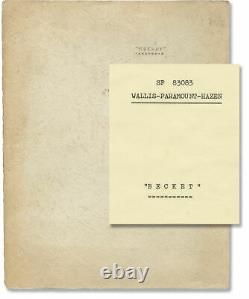 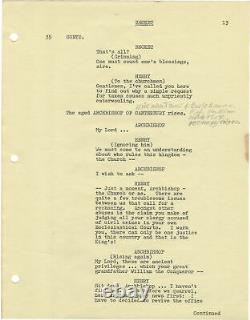 With a few holograph pencil annotations throughout, mostly relating to line revisions and props. Based on the 1959 French play by Jean Anouilh. King Henry II's malcontent relationship with the Church leads to the appointment of his close friend Thomas Becket as the Archbishop of Canterbury.

Henry does not anticipate, however, how seriously Becket will take the vocation, leading to the dissolution of their friendship in the face of Becket's rising political power. Nominated for eleven Academy Awards, winning one for Best Adapted Screenplay. Set in England and France.

Pages Near Fine, wrapper Very Good plus, with some rusting near the binding, bound internally with three silver brads. Subject: 1960s Cinema, Academy Awards, Film Scripts, Films Based on Plays.