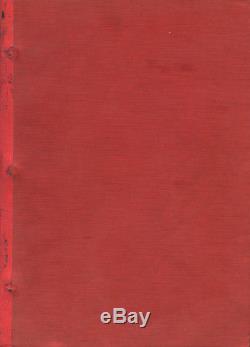 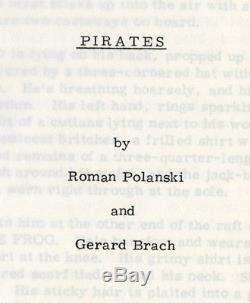 Description: Shooting script, undated, for the 1986 film. With substantive working notations in variously colored holograph ink on a few pages. 7 in red ink at the top right corner of the first blank.

One of Polanski's most underrated efforts, in many ways a companion to "The Fearless Vampire Killers" in that it is a beautifully executed, comedic valentine to the genre films of Polanski's youth. Untitled red vinyl wrappers, bound in red tape as issued. Title page present, with credits for screenwriters Polanski and Brach. Pages Near Fine, wrapper Very Good plus bound internally with three gold brads.

Subject: 1980s Cinema, Film Scripts. Royal Books is located in the midtown area of Baltimore, Maryland. Since 1996, we have specialized in rare books and paper relating to twentieth century literature, genre fiction, the arts, and popular culture, with a particular emphasis on cinema. All books noted as First Editions are also First Printings unless indicated otherwise. This listing was created by Bibliopolis.

The item "Roman Polanski PIRATES Original screenplay for the 1986 film shooting #131895" is in sale since Tuesday, January 8, 2019. This item is in the category "Entertainment Memorabilia\Movie Memorabilia\Scripts\Originals\Unsigned". The seller is "vanburenantiques" and is located in Baltimore, Maryland.