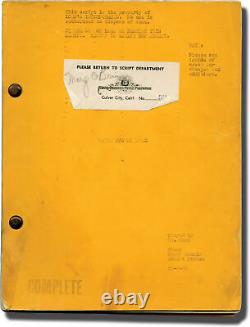 After having been told her aunt's fiance has been traveling around the world, when in reality he has been completing a term in prison, Flavia (O'Brien) loses all faith in her family and God. Yellow titled wrappers, dated December 4, 1946, with credits for screenwriters Harry Ruskin, and Robert Nathan. Title page present, dated December 4, 1946. 141 leaves, with last page of text numbered 120.

Royal Books is located in the midtown area of Baltimore, Maryland. Since 1996, we have specialized in rare books and paper relating to twentieth century literature, genre fiction, the arts, and popular culture, with a particular emphasis on cinema. All books noted as First Editions are also First Printings unless indicated otherwise. This listing was created by Bibliopolis. The item "Roy Rowland TENTH AVENUE ANGEL Original screenplay for the 1948 film #140087" is in sale since Tuesday, June 9, 2020.