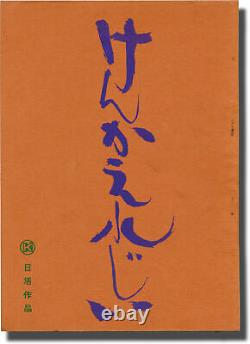 Fighting Elegy (Original screenplay for the 1966 film). Author: Seijun Suzuki (director); Kaneto Shindo (screenwriter); Takashi Suzuki (novel); Hideki Takahashi, Junko Asano, Yusuke Kawazu, Chikako Miyagi (starring) Title: Fighting Elegy (Original screenplay for the 1966 film) Publication: Tokyo: Nikkatsu, 1966. Description: Draft script for the 1966 film. Based on a novel by Takashi Suzuki, a repressed, Catholic young man living in a boardinghouse is infatuated with the landlady's daughter and when he cannot express his feelings, he turns to violence. He joins a gang and begins a fighting routine, exploiting the weakness of classmates.

This listing was created by Bibliopolis. This item is in the category "Entertainment Memorabilia\Movie Memorabilia\Scripts\Originals\Unsigned". The seller is "vanburenantiques" and is located in this country: US. This item can be shipped to North, South, or Latin America, all countries in Europe, Japan.