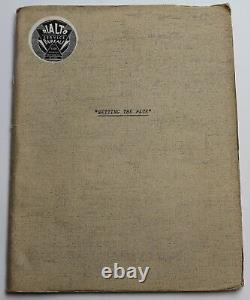 This is an Original Movie Script from 1951 for an unmade movie titled, Setting the Pace. It doesn't say the name of the writer who wrote this script, so I can't find any information about the film. This script has the original production cover on it and it is 64 pages long. Please view all of the pictures above carefully.

It is in good overall condition. Specializes in rare and collectible movie scripts. Our scripts are genuine, authentic and screen used. We also carry movie props from no genre in particular.