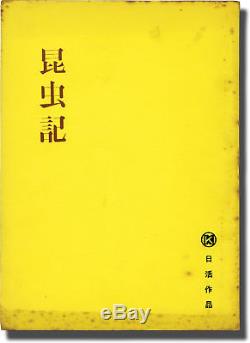 Description: Draft script for the 1963 film. A metaphor for the Twentieth Century Japanese experience, particularly through World War II, told through the perspective of a woman named Tome, born into a lower class family.

She finds herself in a cycle of self-defeat, repeating the same mistakes that have always plagued her. Yellow titled perfect bound wrappers. 156 leaves, with last page of text numbered 29.

Royal Books is located in the midtown area of Baltimore, Maryland. Since 1996, we have specialized in rare books and paper relating to twentieth century literature, genre fiction, the arts, and popular culture, with a particular emphasis on cinema. All books noted as First Editions are also First Printings unless indicated otherwise. This listing was created by Bibliopolis. The item "Shohei Imamura INSECT WOMAN Original screenplay for the 1963 film #141423" is in sale since Sunday, December 23, 2018.