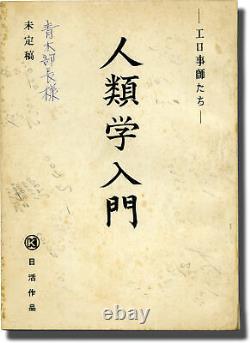 Description: Draft script for the 1966 film. A pornographer is keeping a low profile to keep out of the way of the mob, while also is trying to keep the various people in his life happy, including his stepdaughter, stepson, mistress, and wife (who believes her first husband was reincarnated as a carp).

This listing was created by Bibliopolis. This item is in the category "Entertainment Memorabilia\Movie Memorabilia\Scripts\Originals\Unsigned". The seller is "vanburenantiques" and is located in this country: US. This item can be shipped to North, South, or Latin America, all countries in Europe, Japan.