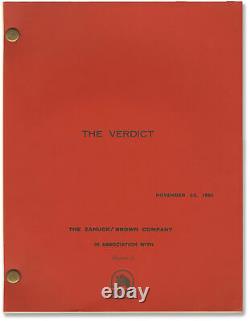 Description: Final Draft script for the 1982 film. Based on the 1980 novel by Barry Reed. David Mamet's second produced screenplay and one of his finest adaptations, a pitch-perfect drama that became a highlight for director Sidney Lumet and actor Paul Newman. Nominated for five Academy Awards including Best Director, Best Picture, and Best Screenplay. Set and shot on location in New York and Boston.