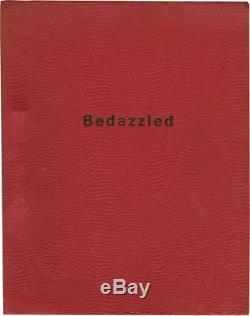 Bedazzled (Original screenplay for the 1967 film). Author: Donen, Stanley (director, producer); Peter Cook, Dudley Moore (screenwriters); Raquel Welch, Peter Cook (starring) Title: Bedazzled (Original screenplay for the 1967 film) Publication: London / Los Angeles: Twentieth Century-Fox, 1967. Description: Draft British script for the 1967 film. Though he attempts to use most of the wishes on trying to woo his waitress coworker, the Devil repeatedly uses loopholes in the wishes in order to thwart him. Shot on location in England.

The item "Stanley Donen BEDAZZLED Original screenplay for the 1967 film #133523" is in sale since Monday, April 8, 2019. This item is in the category "Entertainment Memorabilia\Movie Memorabilia\Scripts\Originals\Unsigned". The seller is "vanburenantiques" and is located in Baltimore, Maryland. This item can be shipped worldwide.