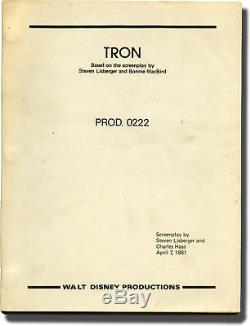 TRON (Original screenplay for the 1982 film). Author: Lisberger, Steven (director, screenwriter); Jeff Bridges, David Warner, Cindy Morgan, Bruce Boxleitner (starring) Title: TRON (Original screenplay for the 1982 film) Publication: Burbank, CA: Walt Disney Productions, 1981. Description: Draft script for the 1982 film. The pinnacle of computer graphics technology at the time, a hybrid of back-lit live action and computer-generated visuals, "TRON" was one of the first of many films to reflect the burgeoning video game craze of the 1980s. The creation of these hybrid graphics took the work of at least four distinct graphics firms, with over 550 people involved in post-production work. While critically acclaimed for its flashy visual spectacle, "TRON" fared more poorly at the box office than the studio expected, though in time the film would escape its cult status and become the highly-lauded landmark in science fiction film history that it had always been. Nominated for two Academy Awards. Set in the future, shot on location in California. White titled wrappers, production No.

0222, dated April 7, 1981, with credits for screenwriters Steven Lisberger, and Charles Haas. 124 leaves, with last page of text numbered 122. Photographically reproduced, with revision pages throughout, dated variously between April 7, 1981 and April 9, 1981.

This listing was created by Bibliopolis. The item "Steven Lisberger TRON Original screenplay for the 1982 film 1981 #142297" is in sale since Thursday, February 21, 2019. This item is in the category "Entertainment Memorabilia\Movie Memorabilia\Scripts\Originals\Unsigned". The seller is "vanburenantiques" and is located in Baltimore, Maryland.