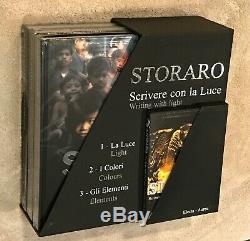 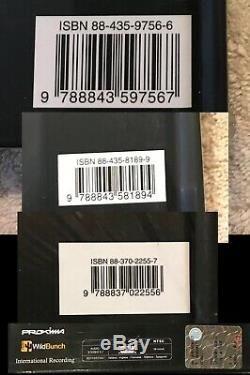 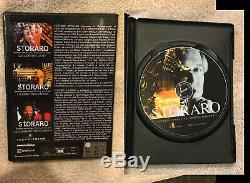 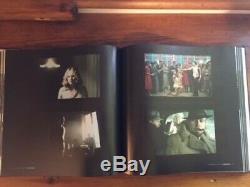 Box set of three books and a DVD documenting Storaros work and philosophy on the art of cinematography. Hardcover - First Edition, Box set, 2003. New, unopened, mint condition in original shrinkwrap. The first book, or chapter, entitled "IN JOURNEY WITH LIGHT" is based on the theme of LIGHT, around which orbit the relationships among SHADE, PENUMBRA, LIGHT, POINTFORM LIGHT, MULTIFORM LIGHT, AR-TIFICIAL LIGHT, NATURAL LIGHT, MOON, SUN, INFINITY.

The second book, with the subtitle: "CHROMATIC EMOTION" is based on the theme of COLORS, around which orbit the relationships among BLACK- RED - ORANGE - YELLOW - GRAY - GREEN - BLUE - INDIGO - VIOLET - WHITE. The third book, with the subtitle: "THE EQUILIBRIUM OF ELEMENTS" is based on the theme of the natural ELEMENTS of life, around which orbit the relationships among EARTH - WATER - FIRE - AIR - FEMININE - MASCULINE - UNCONSCIOUS - CONSCIOUS - MATTER - ENERGY - OVERCONSCIOUS. The THREE volumes, part of a single box set, of very high print quality, are conceived in a bilingual format, with a size of about 30x30 cm (12x12 inches). DVD - 54 Minutes Italian Documentary with English Subtitles. NTSC Region 1 Stereo 5.1.

Writing with Light, which may be the most stunning book ever published by a cinematographer, is most distinctive not in its images but in its prose--or rather, the relationship of Storaro's philosophical musings on the symbolic qualities of light to the shots from his films. [Writing with Light] is an erudite, stimulating and highly personal take on cinema in particular, and image-making in general, by one of the finest directors of photography working today. -Sight and Sound (UK), Spring 2003. The recipient of three Academy Awards for his work on Apocalypse Now, Reds, and The Last Emperor, Vittorio Storaro has accumulated many other honors, including the American Society of Cinematographers Lifetime Achievement Award. Vittorio Storaro - Italian cinematographer widely recognized for his work on numerous classic films including The Conformist, Apocalypse Now, and The Last Emperor.

In the course of over fifty years, he has collaborated with directors such as Bernardo Bertolucci, Francis Ford Coppola, Warren Beatty, and Woody Allen. He has received three Academy Awards for Best Cinematography, a BAFTA Film Award for Best Cinematography, a Primetime Emmy Award, a Goya Award, and a David di Donatello Silver Ribbon Award, in addition to numerous lifetime achievement honours from various film organizations. The item "Storaro Writing with Light, Book Trilogy & DVD" is in sale since Monday, February 18, 2019. This item is in the category "Books\Antiquarian & Collectible".