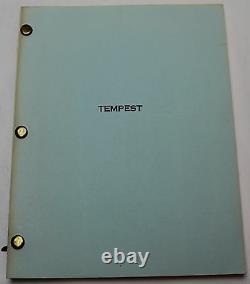 Get your own valid XHTML YouTube embed code. Script Dated: February 17, 1981. This is an Original Movie Script from the 1982 movie, Tempest.

It has the original production cover. It is 111 pages long. Please view all of the pictures provided above. It is in very good overall condition.

A sobering mid-life crisis fuels dissatisfaction in Philip Dimitrius, to the extent where the successful architect trades his marriage and career in for a spiritual exile on a remote Greek island where he hopes to conjure meaning into his life - trying the patience of his new girlfriend and angst-ridden teenage daughter. POSTER IS NOT INCLUDED, IT IS JUST BEING USED AS A VISUAL REFERENCE.