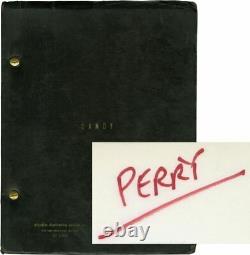 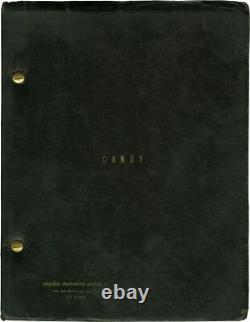 This draft is credited solely to Southern, though Buck Henry was ultimately given full credit for the adaptation from the novel by Southern and Mason Hoffenberg. In her memoir, "Trippin' with Terry Southern: What I Think I Remember, " Gail Gerber details at some length the tangle of legal problems over the publication of "Candy" in the US and abroad.

Publication was poorly controlled, resulting in numerous pirated editions and lawsuits involving Maurice Girodias (Olympia Press), Putnam, and small US paperback publishers such as Lancer, Greenleaf, and Brandon House. She notes, Despite the popularity of the novel, Hollywood was always leery about getting involved with properties that have'clouded title,' so it was no surprise that Frank Perry gave up on the idea of directing the film version of'Candy,' much to Terry's disappointment. Black titled Studio Duplicating Service wrappers. Title page present, undated, noted as First Draft, with credits for screenwriters Southern and Mason Hoffenberg.

Pages Near Fine, wrapper Very Good plus, bound with two gold brads. Subject: Adventure, Comedy, Film Scripts, Screenwriters. Royal Books is located in the midtown area of Baltimore, Maryland. Since 1996, we have specialized in rare books and paper relating to twentieth century literature, genre fiction, the arts, and popular culture, with a particular emphasis on cinema. All books noted as First Editions are also First Printings unless indicated otherwise.