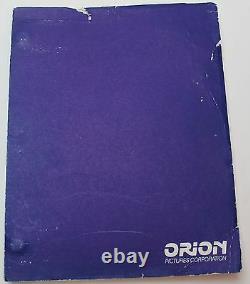 Script Dated: October 6, 1990. This is an original movie script from The Dark Half. It has all white pages and the original Orion production front cover. The script is in good overall condition. Please view all of the picture above carefully.

When Thad Beaumont was a child, he had an operation to remove a tumour from his brain. During the operation, it was discovered that far from being a tumor, the growth was a twin brother of Thad's that never developed. When blackmailed by someone who has discovered his secret, Thad publically "buries" George Stark. From that point on, Thad increasingly becomes the prime suspect in a series of gruesome murders.

The older a film is you also have to figure in the fact that a lot of the original movie scripts have been thrown out or destroyed over time. We do our best to provide the widest selection of original movie scripts in the world. Whatever actor, producer, director, writer or specific film department you are looking for, we probably have a movie script related to the person you are looking for in some form or fashion. I know that there are a lot of items to search through, but there is definitely something for you. Once you check off this little box it will allow you to search for a specific word that is contained in any of our listings' actual description. Here all of the original movie scripts will be categorized by decade, which will help you to narrow down what you are looking for by the year it was made. The item "The Dark Half 1989 Original Movie Script Based of the Stephen King Novel" is in sale since Saturday, May 30, 2020. This item is in the category "Entertainment Memorabilia\Movie Memorabilia\Scripts\Originals\Unsigned".