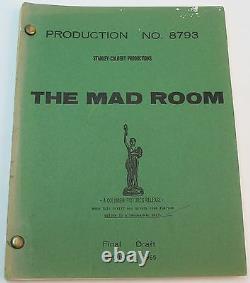 Script Dated: July 23, 1965. This is an original movie script from the 1969 film "The Mad Room". It has the Original Columbia Studio Cover, there is some aging along the border and a paint mark on the top of the cover. The pages insides are all in very good condition.

I have provided close up pictures of all the above mentioned, overall the script is in good condition. An awesome piece of Horror film memorabilia. POSTER IS NOT INCLUDED, IT IS JUST BEING USED AS A VISUAL REFERENCE. Specializes in rare and collectible movie scripts. Our scripts are genuine, authentic and screen used.