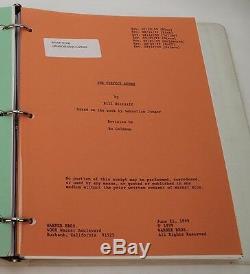 Script Dated: June 25th, 1999. This is an original movie script used in making, The Perfect Storm. This is a super collectible piece of movie memorabilia. The cover of the binder says Budget, but the Film Budget IS NOT included , however it does include the complete One Liner schedule, Shooting schedule, and Movie script. The script has multi-colored revision pages. It is in excellent condition, please see the pictures. In October 1991, a confluence of weather conditions combined to form a killer storm in the North Atlantic. Caught in the storm was the sword-fishing boat Andrea Gail. Magnificent foreshadowing and anticipation fill this true-life drama while minute details of the fishing boats, their gear and the weather are juxtaposed with the sea adventure. None of the fish in the movie were real, they were all either rubber (dead fish) or animatronic (alive fish). The director, Wolfgang Petersen, is an animal rights supporter. For a time, it was in Gloucester, Massachusetts as a floating memorial to fishermen who have lost their lives at sea.

Its current location and disposition are unknown. Three days of exterior shots were filmed on the edge of Hurricane Floyd for the early portions of the storm. Mark Wahlberg stayed in Bobby Shatford's room above the Crow's Nest bar and even checked ID's at the door one night. POSTER IS NOT INCLUDED, IT IS JUST BEING USED AS A VISUAL REFERENCE. Specializes in rare and collectible movie scripts.

We do our best to provide the widest selection of original movie scripts in the world. Whatever actor, producer, director, writer or specific film department you are looking for, we probably have a movie script related to the person you are looking for in some form or fashion. I know that there are a lot of items to search through, but there is definitely something for you. Once you check off this little box it will allow you to search for a specific word that is contained in any of our listings' actual description. Here all of the original movie scripts will be categorized by decade, which will help you to narrow down what you are looking for by the year it was made. The item "The Perfect Storm 1999 Original Movie Script with Schedules George Clooney" is in sale since Wednesday, March 27, 2019. This item is in the category "Entertainment Memorabilia\Movie Memorabilia\Scripts\Originals\Unsigned". The seller is "themoviewizard" and is located in Van Nuys, California.