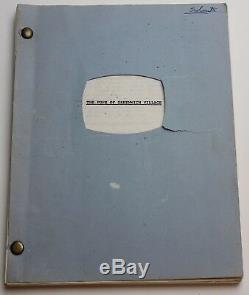 Title: The Pope of Greenwich Village. Script Dated: July 14, 1983. This is an original movie script from the 1984 movie, The Pope of Greenwich Village. It is complete with all white pages inside and is 118 pages long. The front cover has tears around the middle open window area. Please view all of the pictures above carefully. This script is in very good overall condition. The aftermath of the robbery gets them into serious trouble with the local Mafia boss and the corrupt New York City police department. THE POSTER SHOWN IN THE LAST PICTURE ABOVE IS NOT INCLUDED, IT IS JUST BEING USED AS A VISUAL REFERENCE. Specializes in rare and collectible movie scripts. Our scripts are genuine, authentic and screen used. We also carry movie props from no genre in particular. Furthermore, all of our items that are not props or scripts can be found in our Other Memorabilia category. We do not sell reproductions or fakes.

Here all of the original movie scripts will be categorized by decade, which will help you to narrow down what you are looking for by the year it was made. The item "THE POPE OF GREENWICH VILLAGE / 1983 Movie Script Screenplay, Mickey Rourke" is in sale since Saturday, May 30, 2020. This item is in the category "Entertainment Memorabilia\Movie Memorabilia\Scripts\Originals\Unsigned".