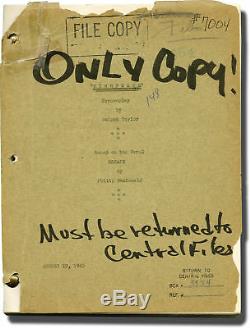 153 leaves, mimeograph, with blue revision pages throughout, dated variously between 8-22-42 and 10-2-42. Pages Near Fine, wrapper Very Good, bound with two gold brads. Subject: 1940s Cinema, Film Scripts, Mystery and Crime, World War II. Royal Books is located in the midtown area of Baltimore, Maryland. Since 1996, we have specialized in rare books and paper relating to twentieth century literature, genre fiction, the arts, and popular culture, with a particular emphasis on cinema. All books noted as First Editions are also First Printings unless indicated otherwise. This listing was created by Bibliopolis. The item "Tim Whelan NIGHTMARE Original screenplay for the 1942 film #129112" is in sale since Monday, April 8, 2019. This item is in the category "Entertainment Memorabilia\Movie Memorabilia\Scripts\Originals\Unsigned". The seller is "vanburenantiques" and is located in Baltimore, Maryland. This item can be shipped worldwide.