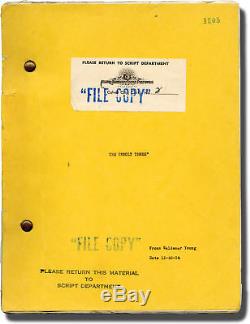 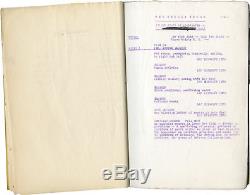 Description: Continuity Draft script for the 1925 film. Studio File Copy, rubber-stamped on the front wrapper. Brief notation on one page in holograph pencil.

Based on Tod Robbins' 1917 novel, a classic of horror fiction about a trio of circus freaks who escape captivity in the circus, open a curiosity shop, and use it as a base from which to launch a devastating crime wave. Robbins would see another of his short stories ("Spurs") adapted by Browning as the classic 1932 film, Freaks. This is the first of two adaptations, being a silent starring Lon Chaney (as Professor Echo the ventriloquist), Victor McLaglen (as Hercules the strongman), and Harry Earles (as Tweedledee the dwarf). The second version was directed by Jack Conway in 1930 as a talkie, with Chaney and Earles reprising their roles, and Ivan Linow as Hercules. Goldenrod titled wrappers, noted as copy No. 2 in holograph ink, and production No. 1505, dated 12/20/24, with credits for screenwriter Young. Title page present, undated, with credits for writer Robbins and screenwriter Young. 113 leaves, with last page of text numbered 111.

Since 1996, we have specialized in rare books and paper relating to twentieth century literature, genre fiction, the arts, and popular culture, with a particular emphasis on cinema. All books noted as First Editions are also First Printings unless indicated otherwise. This listing was created by Bibliopolis. The item "Tod Browning UNHOLY THREE Original screenplay for the 1925 silent film #137520" is in sale since Tuesday, January 8, 2019.