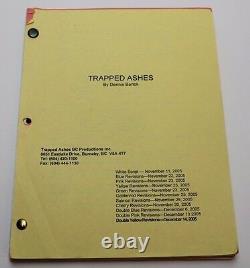 Script Dated: December 14, 2005. This is an original movie script from the 2006 Cult Horror film, Trapped Ashes. It has multi-colored revision pages throughout the script.

It is 96 pages long. Please view the pictures above. This script is very rare, it's an awesome piece of movie memorabilia. The actress Phoebe Kane and her boyfriend Andy, the architect Henry and his wife Julia, the former director Leo and Nathalie receive an invitation for a VIP Tour in the Ultra Studios. When they see the spooky house where the missing director Desmond Hacker filmed "Hysteria", they ask their tour guide to stop the car to visit the infamous house. In a moment, they find that they are trapped in a room without any exit and the guide suggests them to tell the scariest experience of each one like in "Hysteria". Each one tells a spooky tale until they finally discover the end of their stories. POSTER IS NOT INCLUDED, IT IS JUST BEING USED AS A VISUAL REFERENCE.

An original movie script has a lot of character in the item itself and every one of them is different in some way or another. There is usually only one script given to each crew member during production, however, sometimes they do get more than one. This makes original movie scripts very desirable because of how scarce they are. Any changes made to the screenplay during production are known as revisions and these revision pages are inserted into that one script that was issued out to them. For example, if we are talking about a low-budget film with a small cast and only a few crew members, there are actually only a small number of scripts in existence around the world for that film. This aspect of collecting makes it fun but also difficult because there may be a certain writer or director that you love to collect and there may only be a handful of movie scripts that still exist from that specific film that you are looking for. We have some of the rarest movie scripts in the world. Each film project has a different total number of scripts that are issued. The older a film is you also have to figure in the fact that a lot of the original movie scripts have been thrown out or destroyed over time. We do our best to provide the widest selection of original movie scripts in the world. Whatever actor, producer, director, writer or specific film department you are looking for, we probably have a movie script related to the person you are looking for in some form or fashion.