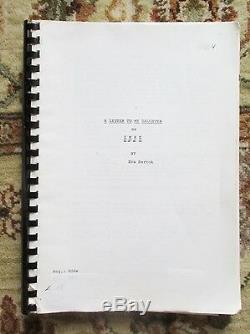 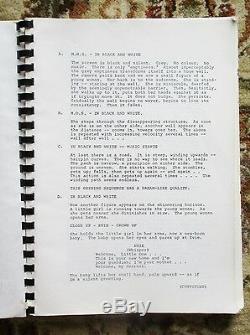 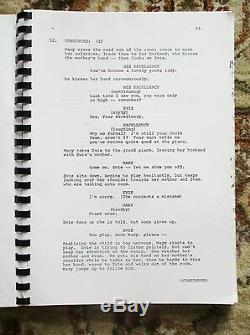 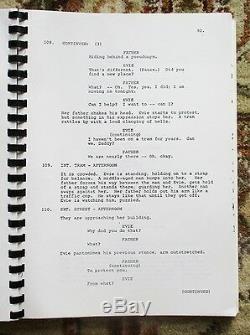 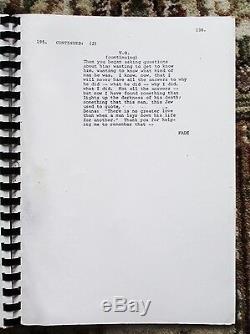 Photocopied on plain white paper copy machine copies were, and still are, common among draft, production and working screenplays; drafts could be quickly made and sent to the film's writers, agents, producers, directors, etc. , 8.5x11 inches, 136 pages plus a title page, pages printed on one side only. GOOD condition, the title page has some words covered with White Out and white label tape, the title is written in black marker on the front page edges; there are a few relevant margin notes (photocopied as is this entire draft); the last few pages have light staining at the left margin; there are the usual photocopying dust marks and some corner creases, otherwise the script is bright and clear. An Unusual and Rare Screenplay by the Actress EVA BARTOK, perhaps revealing some of what it was like for her as a Catholic / Jewish child married to a Nazi Officer in Nazi Germany.

This is the only copy that I have or have ever seen. About EVA BARTOK (from Wikipedia). 1998, was an actress born in Budapest, Hungary as Eva Marta Szoke Ivanovics. She began acting in films in 1950 and her last credited appearance was in 1966. She is best known for appearances in Blood and Black Lace, The Crimson Pirate, Operation Amsterdam, and Ten Thousand Bedrooms.

During World War II, a teenaged Bartok, the daughter of a Jewish father and a Catholic mother, was forced to marry Hungarian Nazi officer Geza Kovacs; the marriage was annulled after the war on the grounds of coercion of a minor. She had four other marriages, all of which ended in divorce, including her final marriage, to actor Curd Jurgens (195556). Her daughter Deana was born in 1957, shortly after the marriage to Jurgens ended. Three decades later, Bartok claimed Deana's biological father was actually Frank Sinatra, with whom she had a brief affair in 1956. Eva Bartok died on 1 August 1998 in London. The item "Unproduced Original FILM SCREENPLAY by EVA BARTOK, Child Bride of a Nazi Officer" is in sale since Saturday, April 6, 2019. This item is in the category "Entertainment Memorabilia\Movie Memorabilia\Scripts\Originals\Unsigned". The seller is "bookpath" and is located in Napa, California. This item can be shipped worldwide.