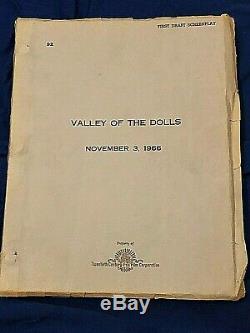 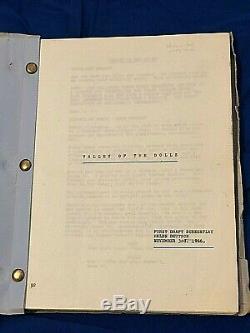 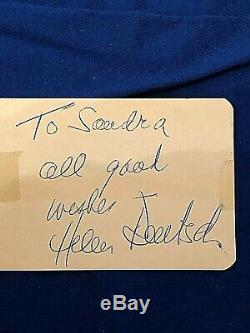 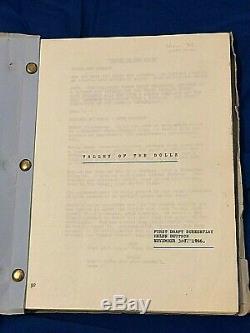 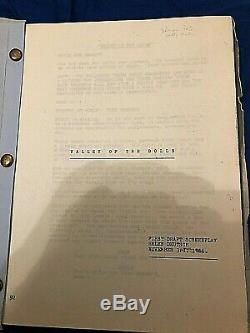 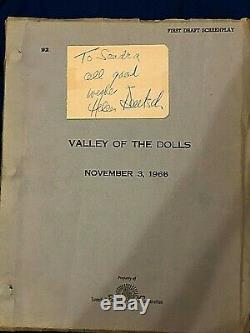 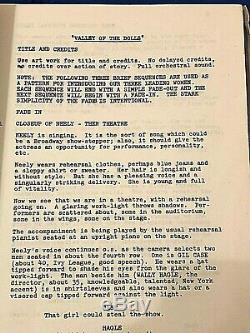 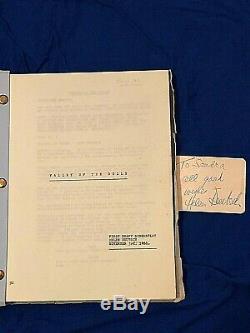 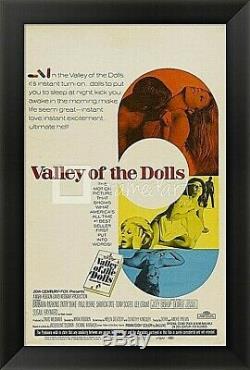 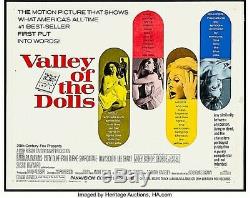 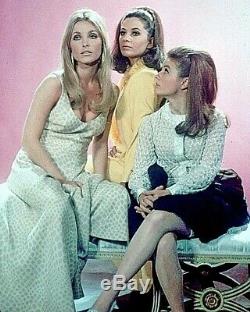 Two very rare and unique items up for sale together: A movie screenplay (script) for The Valley of the Dolls by screenwriter Helen Deutsch , with a separate autograph of Helen Deutsch. Helen Deutsch's Autograph which is separate from the screenplay states: To. Sandra All Good Wishes, Helen Deutsch. This First Draft Screenplay (Movie Script) is for the 1967 Twentieth Century Fox Film Corporation film - VALLEY OF THE DOLLS. This screenplay is dated: November 3, 1966. This is not the final screenplay used for the movie. This screenplay is 184 pages, with appendixes A, B, & C. 11 1/2" x 9 1/2". Vintage studio bound and bradded, with wear to edges of cover. Very good to fine condition. Cript is from the 20th Century Fox 1967 film.

December 15, 1967 in the United States. The Valley of the Dolls movie starred: Susan Hayward, Patty Duke, Barbara Parkins, Sharon Tate, Tony Scotti, Martin Milner, Lee Grant, Paul Burke, and was the first film Richard Dreyfuss appeared in. The music from Valley of the Dolls was by: Andre Previn and his wife Dory Previn (the songs).

The score was by Oscar winning composer: John Williams who was nominated for an Academy Award for his score the film. The Valley of the Dolls film. The Valley of the Dolls film is now fifty-one years old, and has become a cult film, which highlights the late sixties times, fashion, hairstyles and tastes of the late 1960's. (21 March 1906 15 March 1992) was an American. Deutsch was born in New York City and graduated from Barnard College.

S he began her career by managing the Provincetown Players. She then wrote theater reviews for The New York Herald-Tribune. And The New York Times as well as working in the press department of the Theatre Guild.

Her first screenplay was for The Seventh Cross. S novel, National Velvet into a screenplay that became a famous film. After writing a few films Golden Earrings (1947), The Loves of Carmen (1948) and Shockproof (1949) for Paramount and Columbia Pictures, she spent the greater part of her career working for Metro-Goldyn-Mayer (MGM).

There, Helen Deutsch wrote the screenplays for such films as King Solomon's Mines (1950), Kim (1950), It's a Big Country (1951), Plymouth Adventure (1952), Lili (1953), Flame and the Flesh (1954), The Glass Slipper (1955), I'll Cry Tomorrow (1955), Forever Darling (1956) and The Unsinkable Molly Brown (1964). Helen Deutsch's last screenplay was for 20th Century Fox's film : The Valley of the Dolls (1967). Sharon Tate who starred in Valley of the Dolls as Jennifer North was 26 years old and married to movie director Roman Polanski, when she was murdered on August 9, 1969 while pregnant with her eight and a half-month old, un-born son, Paul Richard Polanski. Also murdered that night were: Folgers Coffee heiress, Abigail Folger, celebrity hairstylist, Jay Sebring.

The Tate murders occurred the night before the Leno and Rosemary LaBianca murders on August 10, 1969. The Manson murderers were prosecuted for the infamous Tate - LaBianca Murders by then Los Angeles County District Attorney Vincent (Vince) Bugliosi, who was the author of the book: Helter Skelter.

Sharon Tate appeared in several commercials including one for: Coppertone Sun Tan Oil. Sharon Tate had small parts in the television (TV) shows: Mister Ed and The Beverly Hillbillies. Sharon Tate also appeared in these movies: The Eye of the Devil, The Fearless Vampire Killers, Dont Make Waves, Valley of The Dolls, The Wrecking Crew and her final film: The Thirteen Chairs, known as: 12 + 1.

Thank You for your interest in this wonderul, rare item. If you have any interest, questions, offers, etc... The item "VALLEY OF THE DOLLS Movie Script FIRST DRAFT SCREENPLAY dated November 3, 1966" is in sale since Wednesday, May 8, 2019. This item is in the category "Entertainment Memorabilia\Movie Memorabilia\Scripts\Originals\Unsigned".

The seller is "cam1966" and is located in Phoenix, Arizona. This item can be shipped to United States.