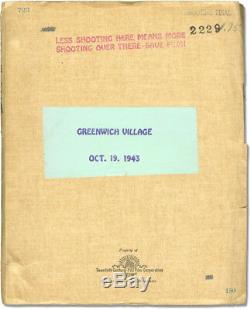 Typical wartime practice of applying a new title label to an old wrapper was employed here, with the studio's paper conservation notice stamped at the top front wrapper. 119 leaves, mimeograph, with blue revision pages throughout, all dated 10/30/43; laid in at the rear is a 9-page "Revised Added Scene, " that begins with a 2-page outline describing the scenario, followed by a script, dated between 1/23/44 and 1/25/44. Pages Near Fine, wrapper Very Good plus with yapping and light wear at the edges as usually found, bound with two gold brads. Royal Books is located in the midtown area of Baltimore, Maryland. Since 1996, we have specialized in rare books and paper relating to twentieth century literature, genre fiction, the arts, and popular culture, with a particular emphasis on cinema.

The item "Walter Lang GREENWICH VILLAGE Original screenplay for the 1944 film 1943 #117612" is in sale since Saturday, March 23, 2019. This item is in the category "Entertainment Memorabilia\Movie Memorabilia\Scripts\Originals\Unsigned". The seller is "vanburenantiques" and is located in Baltimore, Maryland. This item can be shipped worldwide.