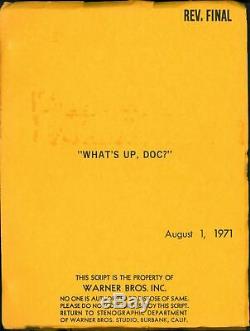 Based on an original story by David Newman, Robert Benton, and Peter Bogdanovich. This screwball comedy starring Barbara Streisand and Ryan O'Neil also featured Madeline Kahn's feature film debut. Henry, who wrote The Graduate, won the Writer's Guild award for this screenplay. The movie, directed by Peter Bogdonovich, was the highest grossing comedy of 1972 and is on the American Film Institute's lists of the 100 best comedies and the 100 best love stories.

We are members of the Antiquarian Booksellers' Association of America (ABAA), the International Online Booksellers Association (IOBA), and the American Booksellers Association (ABA), and we stand behind what we offer for sale. We leave feedback for buyers once they have posted feedback for us. We work hard to keep buyers happy and to resolve the rare problem promptly. Generated by HammerPriced, custom listing services for booksellers. The item "What's Up Doc Original Script / Buck Henry Film Movies 1971 #209568" is in sale since Friday, May 3, 2019. This item is in the category "Books\Antiquarian & Collectible". The seller is "eurekabookshop" and is located in Eureka, California. This item can be shipped to United States.