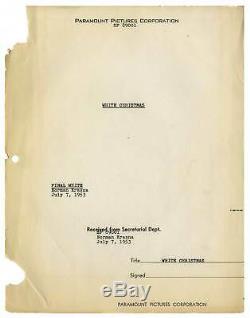 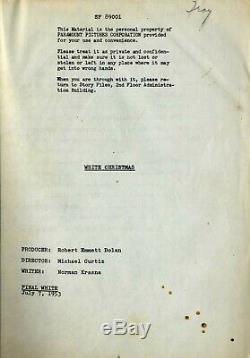 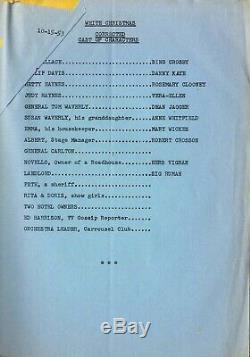 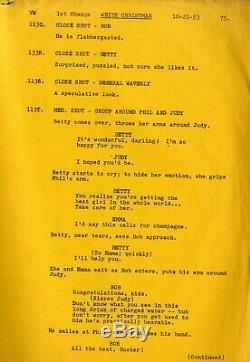 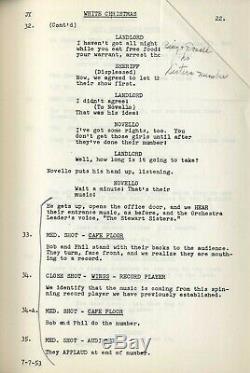 Vintage original final white film script, July 7, 1953, Hollywood: Paramount Pictures, 1953. Quarto, brad bound, mimeograph, 89 pp. Script by Norman Krasna for this beloved Christmas musical with songs by Irving Berlin, a number of which were reprised from the 1942 film HOLIDAY INN, for which this film was something of a remake as well as a kind of sequel.

The name "Troy" is written in pencil on the title page, which almost certainly refers to Troy Sanders (credited as "music associate"). A number of pages are neatly dogeared, and all of those have penciled notations about musical numbers. The first six pages are bound before the title page.

There are some revision scripts on colored paper dated up through 10-21-53 bound after the title page. Distribution page has come loose from brads, overall VERY GOOD+. It must come back in the same condition as it was sent. AUTHENTICATION: My name is Walter Reuben. I have been collecting movie posters since 1978. I have been a full-time dealer since 1982. Everything which I sell is fully researched and entirely guaranteed to be completely authentic and as described.

A lifetime of experience goes behind every description of every piece which I offer. ABOUT ME: For further information, go to the ABOUT ME. The item "WHITE CHRISTMAS (1954) Final White film script dated July 7, 1953 by Krasna" is in sale since Saturday, November 23, 2019. This item is in the category "Entertainment Memorabilia\Movie Memorabilia\Scripts\Originals\Unsigned".