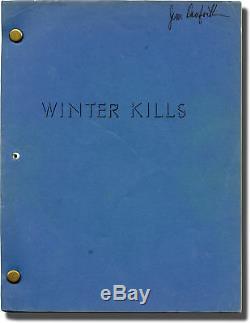 The item "William Richert WINTER KILLS Original screenplay for the 1979 film #143721" is in sale since Tuesday, April 9, 2019. This item is in the category "Entertainment Memorabilia\Movie Memorabilia\Scripts\Originals\Unsigned". The seller is "vanburenantiques" and is located in Baltimore, Maryland.