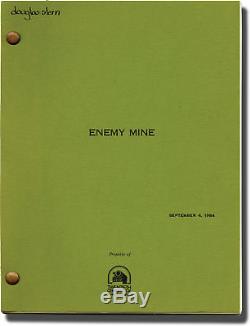 Enemy Mine (Original screenplay for the 1985 film). Author: Petersen, Wolfgang (director); Edward Khmara (screenwriter); Dennis Quaid, Louis Gossett, Jr. Brion James, Richard Marcus (starring) Title: Enemy Mine (Original screenplay for the 1985 film) Publication: Los Angeles: Twentieth Century-Fox, 1984. Description: Revised Final Draft script for the 1985 film. Copy belonging to uncredited crew member Douglas Stern, with his name in holograph ink on the front wrapper and on a set of laid-in revision pages. Based on a 1979 novella by Barry Longyear. Willis Davidge (Quaid) is a human fighter pilot who is stranded along with Jeriba Shigan (Gossett) on a hostile planet. Jeriba is of a race of asexual aliens reptilian in appearance, and is initially Willis' enemy. The two quickly realize that the key to survival is by helping one another. Set in the year 2100. Shot on location in Germany, Spain, and Iceland.

This listing was created by Bibliopolis. The item "Wolfgang Petersen ENEMY MINE Original screenplay for the 1985 film 1984 #138377" is in sale since Saturday, March 23, 2019. This item is in the category "Entertainment Memorabilia\Movie Memorabilia\Scripts\Originals\Unsigned". The seller is "vanburenantiques" and is located in Baltimore, Maryland. This item can be shipped worldwide.