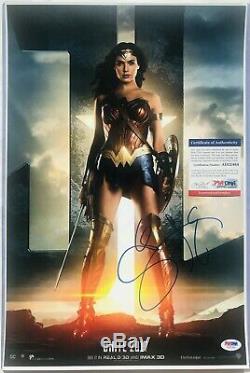 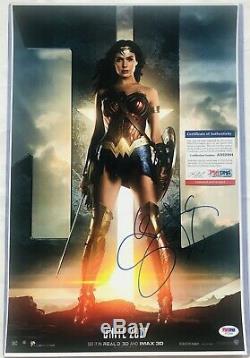 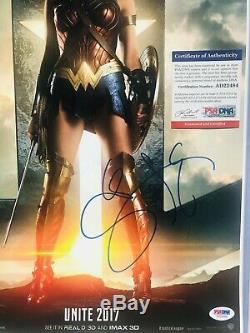 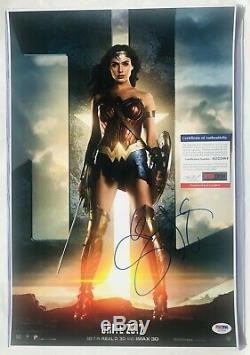 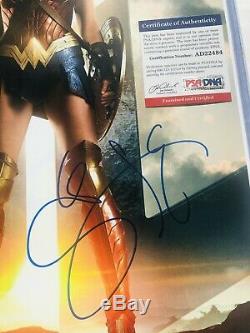 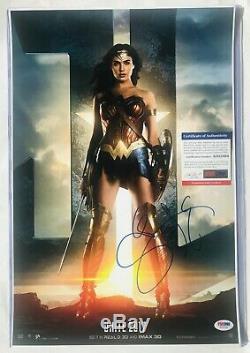 Please see all 6 clear pictures for exact condition of this Large Movie Photo and Signature. This Wonder Woman Movie Photograph item is really SO COOL!! And really a Perfect Signature in a Great Spot on the Photo!!

Really will Display Great if Framed. AMAZING LARGE 12" x 18" GAL GADOT SIGNED WONDER WOMAN MOVIE PHOTOGRAPH. THIS IS THE REAL DEAL! Gal Gadot Varsano was born on April 30 1985 and is an Israeli actress and model. At age 18, she was crowned Miss Israel 2004.

She then served two years in the Israel Defense Forces as a combat instructor, and began studying law and international relations at IDC Herzliya college while building up her modeling and acting careers. Gadot's first international film role came as Gisele Yashar in Fast & Furious (2009), a role she reprised in subsequent installments of the film franchise.

She went on to earn worldwide fame for portraying Wonder Woman in the DC Extended Universe, beginning with Batman v Superman: Dawn of Justice (2016), followed by the solo film Wonder Woman and the ensemble Justice League (both 2017). In 2018, Gadot was included on Time's annual list of the 100 most influential people in the world, and was listed among the highest-paid actresses in the world.

Wonder Woman is a 2017 American superhero film based on the DC Comics character of the same name, produced by DC Entertainment in association with RatPac Entertainment and Chinese company Tencent Pictures, and distributed by Warner Bros. It is the fourth installment in the DC Extended Universe(DCEU). Directed by Patty Jenkins from a screenplay by Allan Heinberg and a story by Heinberg, Zack Snyder, and Jason Fuchs, Wonder Woman stars Gal Gadot in the title role, alongside Chris Pine, Robin Wright, Danny Huston, David Thewlis, Connie Nielsen, and Elena Anaya.

It is the second live actiontheatrical film featuring Wonder Woman following her debut in 2016's Batman v Superman: Dawn of Justice. In Wonder Woman, the Amazon princess Diana sets out to stop World War I, believing the conflict was started by the longtime enemy of the Amazons, Ares, after American pilot and spy Steve Trevor crash-lands on their island Themyscira and informs her about it.

Wonder Woman is an ongoing American comic book series featuring the DC Comicssuperhero Wonder Woman and occasionally other superheroes as its protagonist. The character first appeared in All Star Comics #8 (cover dated December 1941), later featured in Sensation Comics (January 1941) series until having her own solo title.

The series would contain many volume revamps and many new writers during the ages. Many of the fictional events within the DC Universe affected the stories of the titular superhero with reboot among reboot such Crisis on Infinite Earths, Final Crisis and The New 52. The newest relaunch debuted in 2016, DC Comics rebooted its entire line of titles called DC Rebirth.

Star Wars is an American epic space opera media franchise, centered on a film series created by George Lucas. It depicts the adventures of various characters "a long time ago in a galaxy far, far away".

The franchise began in 1977 with the release of the film Star Wars (later subtitled Episode IV: A New Hope in 1981), which became a worldwide pop culture phenomenon. It was followed by the successful sequels The Empire Strikes Back (1980) and Return of the Jedi (1983) these three films constitute the original Star Wars trilogy. A prequel trilogy was released between 1999 and 2005, which received mixed reactions from both critics and fans.

The series has spawned an extensive media franchise including books, television series, computer and video games, theme park attractions and lands, and comic books, resulting in significant development of the series' fictional universe. Star Wars holds a Guinness World Records title for the "Most successful film merchandising franchise". The former distributor, 20th Century Fox, was to retain the physical distribution rights for the first two Star Wars trilogies, was to own permanent rights for the original 1977 film and was to continue to hold the rights for the prequel trilogy and the first two sequels to A New Hope until May 2020.

This item is in the category "Entertainment Memorabilia\Autographs-Original\Movies\Photographs". The seller is "oldstarwars" and is located in Boca Raton, Florida.